TAMPA - One of Ybor City's long-time cigar families has sold their iconic King Corona Cigars Bar and Cafe, ending an era for a family with roots dating back five generations in the industry.

Brenda Barco, whose great grandparents moved from Cuba to Ybor City in the 1890s, sold the popular landmark to Justin Jacobson of Tampa.  A sale price was not disclosed.

Her grandfather, Mario Jorge Puig, born in 1905, was rolling cigars by the time he was eight years old, according to a story in the Tampa Bay Times.

At its peak, Tampa's cigar industry employed more than 10,000 people in more than 200 factories. Producers made up to half a billion hand-rolled cigars each year — primarily with Cuban tobacco.

- An article in the July 9 print edition of the Tampa Bay Times about the sale.

She and her husband, Don Barco, had operated the store since 1999. 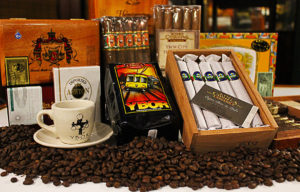 One reason King Corona became a popular destination spot for cigar smokers was because of its covered outdoor seating along Seventh Street.

The family had owned and operated various cigar-making and selling enterprises for decades in Ybor City, once known as the Cigar Capital of the World.

Jacobson, 34, who moved to Tampa eight years ago from Atlanta, said no major changes were planned.  He has installed cigar lockers and may add some TVs.

"This was the first place where I had a cigar in Tampa. I'd sit here once or twice a week and say to my friends that owning a place like this was a dream."