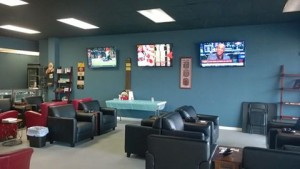 Relax with your favorite cigar at TSP Cigars on 34th St. N. in St. Petersburg near the Po Folks restaurant just south of 22nd Ave. N.

Some belated congratulations and wishes for a prosperous New Year to the newly incarnated TSP Cigars, which relocated the former Cigar Loft late last month.
The cigar lounge was shifted from downtown St. Petersburg to some really nice digs at 1941 34th St. N.
TSP Cigars is behind the Po Folks restaurant in the strip shopping center anchored by Office Depot and Winn Dixie on the southeast corner of 34th and 22nd Ave. N.
Their new phone number is (727) 329-9380.
Former Cigar Loft owner Tom Gabriele sold the business after six years to a pair of his customers, but still works Friday and Saturday at TSP Cigars. The sale price of the business and its inventory was not disclosed.
“I was in the business with Cigar Loft for six years,” Gabriele said. “You know how things are. You get kind of burned out. I was ready to do a little bit less work.”